Unlike last year, Apple is holding an in-person fall event named “Far Out” on 7 September. iPhone 14 will be the big headline announcement at the event. Other things will also be unveiled, including the Apple Watch Series 8 and probably more.

The launch will be streamed live from the Apple Park campus at 10:00 am Pacific Time.

According to MacRumors, this article highlights everything we’re expecting to see (and some more distant possibilities) at the event.

The most significant change to the iPhone 14 is the elimination of the 5.4-inch iPhone mini, which is being discontinued due to lackluster sales. The iPhone 13 mini will be the last iPhone at the 5.4-inch size, but four iPhones are still coming this year.

iPhone 14 size will be bigger for all models 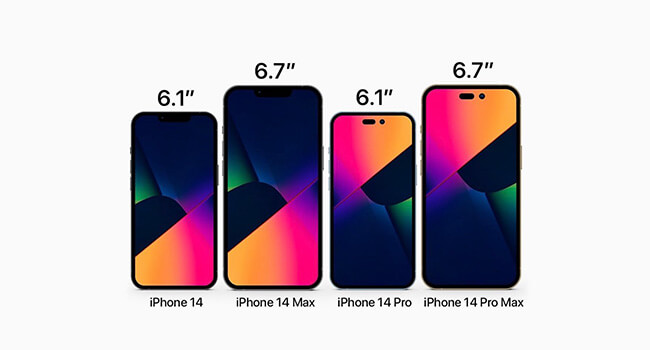 iPhone 14 models will have an upgraded front-facing camera

The ‌iPhone 14‌ models are getting the upgraded Ultra Wide camera from last year’s ‌iPhone 13‌ models. They’ll also have an upgraded front-facing camera with a wider f/1.9 aperture and autofocus capabilities.

We’re expecting 6GB RAM, up from 4GB, and all ‌iPhone 14‌ models are rumored to feature an updated Snapdragon X65 10 Gigabit 5G modem from Qualcomm. The X65 modem enables some satellite connectivity features, so there have been rumors that Apple will implement satellite-based emergency features that let users send texts and report major emergencies in areas without cellular coverage.

WiFi 6E support is coming, and there’s rumored to be a new purple color that will join in black, white, red, and blue. Pricing is expected to stay the same, starting at $799.

While minor changes are coming to the standard ‌iPhone 14‌ models, the Pro line is getting a much more significant update. The 6.1 and 6.7-inch sizes aren’t changing, but Apple is rumored to eliminate the notch.

iPhone 14 Pro line will have a more streamlined look

Apple is implementing a pill-shaped cutout and a hole-punch cutout, which will house the front-facing camera and the TrueDepth system needed for ‌Face ID‌. Though these are two precise cutouts, Apple plans to combine them into one long pill-shaped notch using the software.

The space between the two cutouts will be blacked out when the ‌iPhone‌ is activated, making the cutouts indistinguishable. This design will look like one cutout rather than two different-sized cutouts, which will make for a more streamlined look. 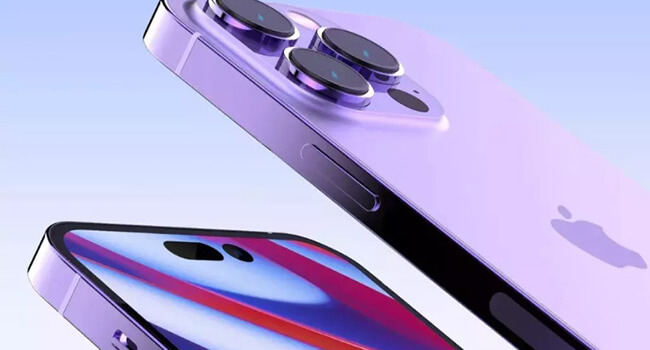 The ‌iPhone 14 Pro‌ models are rumored to have a 1Hz to 120Hz ProMotion display, enabling a long-awaited Always-On Display function that’s expected to work similarly to the Apple Watch’s always-on display.

The front-facing camera will feature the same wider f/1.9 aperture and autofocus capabilities as the regular ‌iPhone 14‌. There will be a more significant, more prominent camera bump to accommodate a new 48-megapixel Wide lens with a 21 percent larger sensor that supports higher-resolution images and 8K video recording, marking one of the most significant camera updates we’ve seen on the ‌iPhone‌ line in years.

The telephoto lens will be upgraded from a 6-element lens to a 7-element lens, and we could also see improvements to the Ultra Wide camera. A new purple color could join the graphite, gold, and silver options. 6GB RAM is expected, the same as the iPhone 13 Pro models, and we are counting on a faster Snapdragon X65 10 Gigabit 5G modem, WiFi 6E, and up to 2TB storage space.

iPhone 14 Pro models might have a higher starting price

We may get a new temperature sensing feature that can detect changes in body temperature. It’ll be used for fertility planning, but future versions of the Apple Watch could alert you if you have a higher than average body temperature.

Measuring body temperature from the skin is not as accurate as getting a core body temperature reading. Hence, the ‌Apple Watch Series 8‌ will not likely provide a specific temperature number, instead just monitoring changes over time.

Car crash detection may make it into the ‌Apple Watch Series 8‌, with the feature mirroring fall detection. The accelerometer would detect a gravitational force spike and then alert emergency services if necessary.

More updates might be added to the Apple Watch Series 8

There could be updates to activity tracking. We don’t know precisely that Apple is working on an updated low-power mode. The updated low power mode would allow more functions to work while battery life is being preserved, rather than simply limiting all features.

Apple is planning to launch a higher-end “Apple Watch Pro,” though it may sport a different name. The “pro” version of the Apple Watch will have an updated design that Bloomberg’s Mark Gurman has described as an “evolution of the current rectangular shape.”

Apple Watch Pro will have a bigger screen size (display)

It will be larger than the current 45mm ‌Apple Watch Series 7‌ and will feature a display that measures two inches diagonally, up from the 1.9-inch screen size of the 45mm Apple Watch. The display will have a 410 x 502, and the extra display area could be used to show additional fitness metrics on a single screen.

Apple Watch Pro will have a shatter-resistant display

The ‌Apple Watch Pro‌ isn’t just a higher-end version of the Apple Watch; it’s also more rugged and is aimed at those who need more protection for extreme sports and other intensive activities. It will be made from a titanium alloy that is better able to hold up to abuse, and it will have a shatter-resistant display.

Apple Watch Pro will have a longer battery life

Because the ‌Apple Watch Pro‌ is expected to be larger than the Series 8 models, it will accommodate a bigger battery. It could thus support longer battery life for longer workout times. The low power mode could last for more than one day before recharging.

Aside from the new design and the larger body, the ‌Apple Watch Pro‌ is expected to include all of the same features as the Series 8. It will be more expensive, perhaps between $900 and $1000.

A new version of the affordable Apple Watch SE is in the works and is expected to debut alongside the ‌Apple Watch Series 8‌, but there’s no word on what new features it might include. We can perhaps expect a faster processor and an always-on display, a feature initially introduced with the Series 6.

Early rumors suggested that Apple might go with a smaller, stemless design. Still, more recent information has indicated a design similar to the current design with silicone ear tips and a stem.

The charging case is rumored to have speaker holes, so it can play a sound when the AirPods are lost, which will go along with improved Find My integration. The AirPods 3 acoustics will enhance the sound, and an updated H1 chip with self-adaptive noise cancellation capabilities will be added.

Apple is rumored to be transitioning to USB-C across its product lineup, but this year’s ‌AirPods Pro‌ is expected to continue to feature a Lightning port.

While new iPhones, Apple Watch, and AirPods should already make for a jam-packed event, there are also new iPads in the works. Still, it is not clear if Apple will introduce these devices at the September event or save them for a second event that could potentially happen in October.