Donations dropped by around 4 percent in 2017 compared to 2016, with users sending 5.1 million text messages through MegaKheir, raising EGP 25,769,140 million to lead charities such as the 57357 Children Cancer Hospital, Dar El-Orman, Magdi Yacoub Heart Foundation, Ahl Masr Foundation, and the Egyptian Food Bank, among others.

Around 77 percent of donations were poured into the health sector, with users donating EGP 19 million to charitable hospitals and NGOs working on disease treatment and prevention, representing 42 percent of all charities raising funds through MegaKheir’s platform.

EGP 27,000, or 0.11 percent of total donations, went to NGOs raising funds for educational projects, representing 12 percent of all non-profits on the platform. 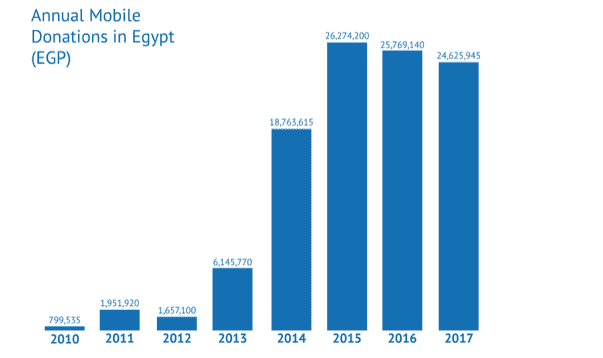 Around EGP 104 million in donations were raised over the past 8 years through MegaKheir, a blend of the Greek word Mega (great) and the Arabic word Kheir (good), which currently generates more than 95 percent of Egypt’s mobile donations.

Around 3.7 million mobile users have donated through MegaKheir since its inception either through text messages in increments of EGP 5 to a designated short-code or through the mobile application, with every donation deducted from users’ mobile credit or charged to their monthly bill.

The status of mobile donations in Egypt

“The culture of giving is still strong in Egypt. People are giving to charity even when they are making ends meet. Fewer people donated last year, but those who did gave more. Those who are capable of donating were more conscious of the impact of tougher economic conditions and have done more to support others,” said Sherif Radi, Chief Operating Officer of TA Telecom.

“Egypt’s well-being relies heavily on the work of civil society heroes who are working on multiple fronts around the clock to help in combating Hepatitis C, treating cancer and other diseases, eliminating poverty, or eradicating illiteracy. Tech companies have a pivotal role to play in empowering NGOs through building innovative, faster, and cheaper fundraising tools,” Radi added.

“The slight drop in donations is not that significant given the price increase, which affected NGOs working on health, education, poverty, disability, and people in debt. It only costs EGP 5 to donate to charity through mobile. Still, people are aware that this simple amount is causing a ripple effect, generating millions for Egyptian charities who are in desperate need of such help,” said Maissera Ellaithy, who heads MegaKheir at TA Telecom.

England vs France live broadcast in MENA, how to watch on the internet