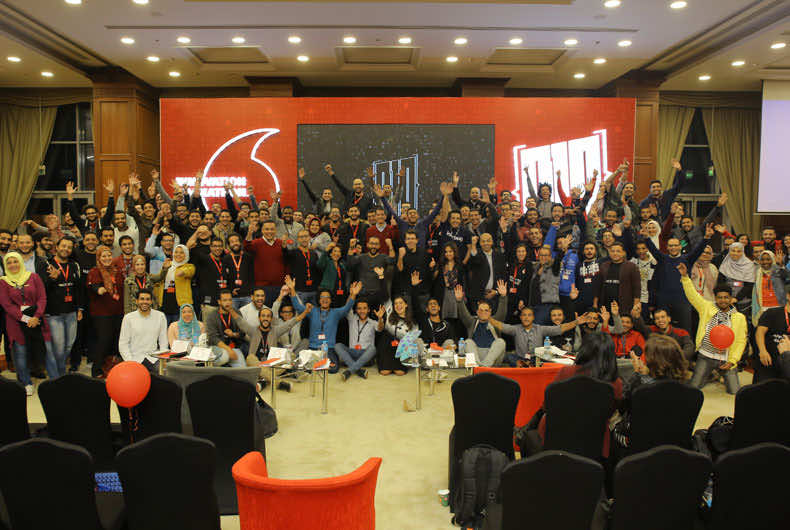 Vodafone Egypt held the first Hackathon of its kind in Egypt and in the region, inviting developers to innovate in software development. The company awarded three teams of developers out of 44 participating teams, with up to EGP 210,000 in prizes for their innovative ideas presented at the company’s first innovation Hackathon that took place last week in the company’s Headquarters in Smart Village.

Vodafone Egypt become the first telecommunications company in the country with a pioneering vision to shape future generations in digitizing a diverse set of sectors.

Supporting exciting technologies has been an integral part of Vodafone Egypt’s development strategy, as the company intends to cooperate with the Egypt’s digital transformation direction and the 2030 vision adapted by the government.

The Hackathon focused on sectors including education, health, energy, transportation and environmental fields, supporting youth in innovating beyond traditional means.

Vodafone recently celebrated its 20th anniversary in Egypt, marking 2018 as a year filled with accomplishments as the #1 network.

Youth have set Vodafone Egypt as a role model in technological advances such as artificial intelligence, RPA, IoT, Cognitive technologies and applications development.

The online community observed the Hackathon closely to understand the up and coming trends of these technological specializations to understand the ecosystem of inspirational ideas from engineering students, alumnus and existing professionals with successful careers.

Here are the three winners that have inspired us all to look upon the next generation of techies in the country.

A platform that connects people with disabilities and volunteers who want to help them with simple daily tasks. Volunteering can be either paid, if it’s an urgent request for help, or free of charge.

The platform is like an Uber service for volunteers to help people with disabilities in the community. The uber-like platform was innovated by a team of 4 innovative youth named Sara Mahmoud, Abdelrahman El-Shobragy, Anwar Aly, and Aya El-Kader.

2. Robabikya (Vodafone advised them to rename it Bikya)

Founded by Salma Medhat, Ahmed Hisham, Ahmed Zaki, Amr Ahmed and Mohamed Hussein, “Robabikya” is a waste management mobile application that let users trade their trash for cash, in exchange of having discounts on online shopping platforms other services.

A 3-part system that helps to alleviate obstacles for people with communication hardships, (mainly paralyzed and MS patients). The first system is a sensor-based glove to sense the patient’s fingers movements and match them with a corresponding request from the patient, the second one is the PC application, which displays the request.

It can also enable the patient to use the glove to write on the on-screen keyboard provided in it. While the third part is the mobile application, which should be with the patient’s overseer, and it will directly receive messages from the patient through the PC application in case he/she needs help.

It is a big surprise that the innovative ParaZtec is an innovative system that was implemented by a team of high school students named; Mazen Kazem Mahmoud, Mahmoud Adel Mohamed, Ahmed Haris Ibrahim and Mohamed Ayman.